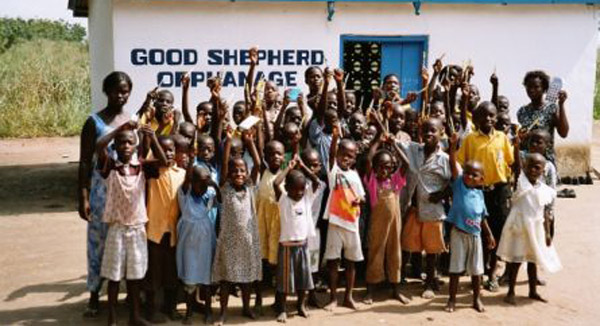 My desire to care for the less fortunate started from when I was a young man. Being brought up in a slum by a single parent, I witnessed how children were suffering after being abandoned by their parents due to excess drinking or poverty and orphans who were left destitute after the death of their parents. I felt in my heart that all the hurting children should be taken care of by the government, yet nobody cared about them. It is because of this situation that I vowed in my heart that if I get a job in future and have my own house, I would not live to see a child suffer after losing parents but would accommodate and live with them.  children were left orphaned all over, my heart was yearning with passion to accommodate all of them in order to relieve them from suffering. This is what motivated me to start an orphanage, to at least help one of them.

Therefore I made up my mind to take up a 4 year old girl from our church who's parents both died within a short space of time and no relatives were willing to care for her. In December 2004 we opened our door to this orphaned girl and made her one of our own.

In January 2005, while watching the news on the television, I saw a family of four children abandoned by their grandmother after their parents died and with no one left to take care of them. I was deeply concerned and went to Mwiki where they were living alone, they took me to where their grandmother was and she allowed me to bring them back to Dream. The children were aged between 4 and 10 years old.

In February 2005 I went to the Ministry of Social Services to express my desire to help the needy children and after hearing that children were already living in our home; they agreed to register us as an orphanage. So today we are registered under the Ministry of Home Affairs as a charitable institution.

We then put up a sign to advertise the orphanage to the public; the children's office and the communities at large have been knocking at our door with orphaned children who have no one to take care of them. We intend to keep the children till they are 19 years old unless they are still in education.

Our home has now grown to having 80 children in total. We are still looking forward to the next years coming.