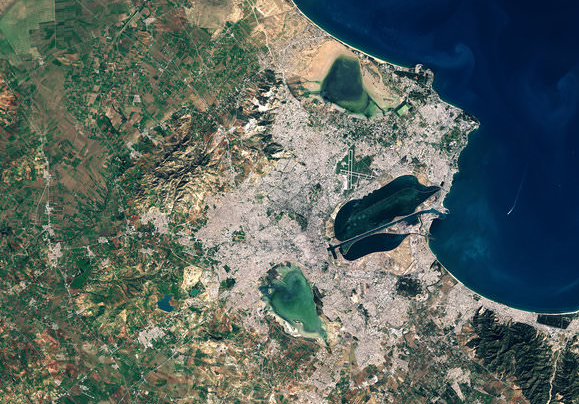 This Copernicus Sentinel-2 image features Tunisia’s capital Tunis, in North Africa, and highlights some of the country’s important wetlands.

Credit: ESA, This image is featured on the Earth from Space video programme.

Captured on 15 December 2017, the image shows part of the Mediterranean’s Gulf of Tunis, which provides natural protection for this ancient city and busy port. The area has seen a series of settlements over the last 3000 years, but arguably the most famous is Carthage, which now forms a suburb to the northeast of the centre of Tunis.

While the image offers sharp contrast between the city’s urban environment and surrounding hills and agricultural fields, it also depicts several bodies of water, which are protected under the Ramsar Convention on Wetlands.

World Wetlands Day is celebrated every year on 2 February, and with this year’s theme being Wetlands for a Sustainable Urban Future, this image of Tunis highlights how important these wetlands are to the city.

There are seven Ramsar sites around Tunis, five of which are visible in the image. Lake Tunis can be seen close to the coast and features a causeway. It is a brackish lagoon surrounded by intertidal marshes.

It offers good nesting grounds for several species of bird and wintering grounds for species such as the Greater Flamingo. Mammals include rodents and bats, and it is an important source of food, a spawning ground and a nursery for several fish species. The main human activity carried out is fishing, regulated according to its protected status.

The shallow lake of Sebkhet Sejoumi is west of Lake Tunis and is one of the largest water reservoirs protecting the capital from floods. Unlike other sebkhets – or salt lakes – in the area, Sejoumi retains some water all year and is therefore particularly important for wildlife in the summer when other sebkhets dry up.

The smaller protected lakes of Ghdir El Golla and Barrage Mornaguia can be seen further west on the outskirts of the city. To the north of the city, lies Sebkhet Ariana which loses much of its water in the summer.

Through its GlobWetland Africa project, ESA works in partnership with the Ramsar Secretariat to use information from satellites to help conserve and manage vulnerable wetlands such as these.

This image is featured on the Earth from Space video programme.