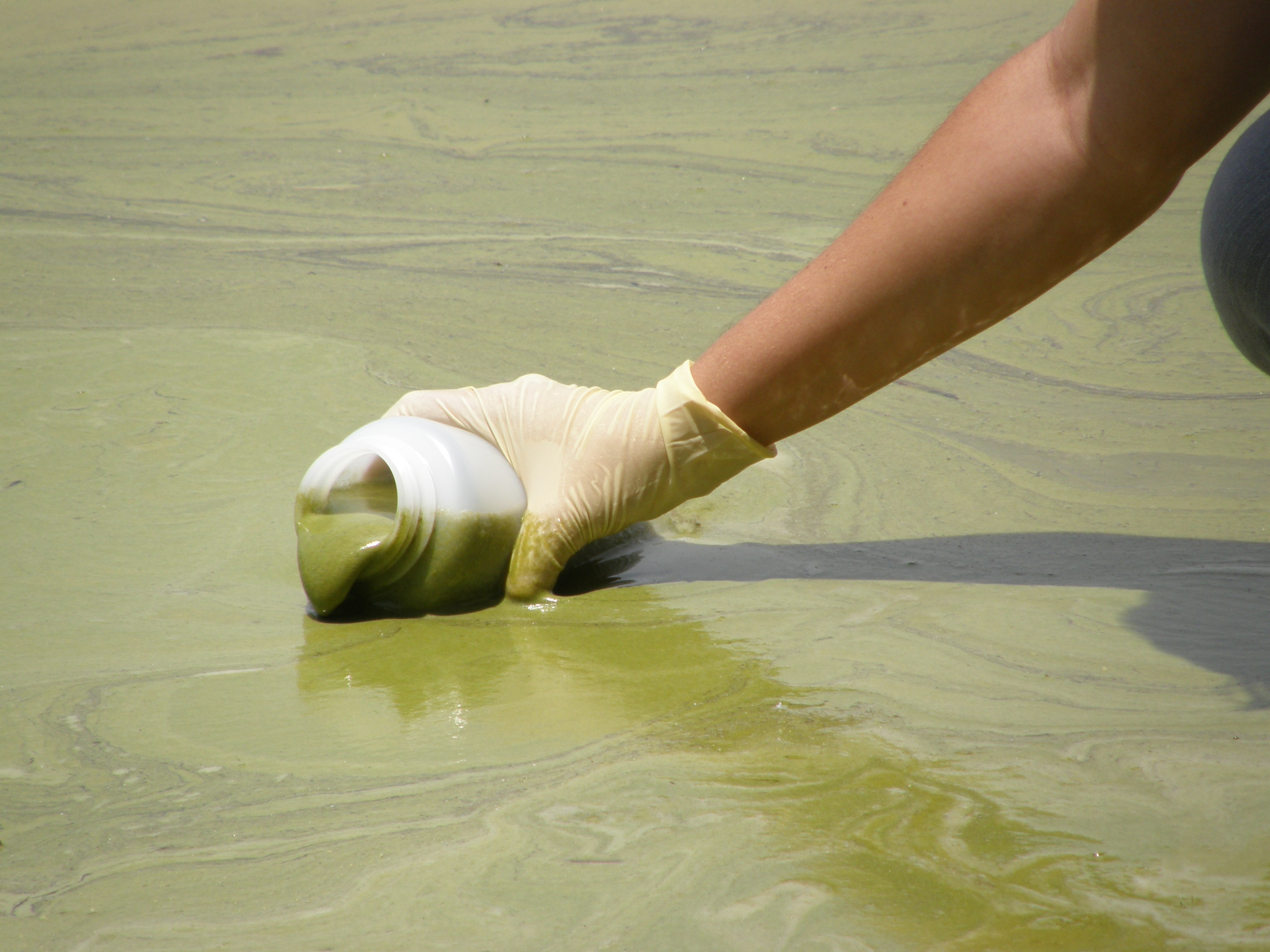 By ROBIN A. SMITH @DUKERESEARCH

The last 10 years have seen a surge in the use of tiny substances called nanomaterials in agrochemicals like pesticides and fungicides. The idea is to provide more disease protection and better yields for crops, while decreasing the amount of toxins sprayed on agricultural fields.

But when combined with nutrient runoff from fertilized cropland and manure-filled pastures, these “nanopesticides” could also mean more toxic algae outbreaks for nearby streams, lakes and wetlands, a new study finds.

The results appear June 25 in the journal Ecological Applications.

Too small to see with all but the most powerful microscopes, engineered nanomaterials are substances manufactured to be less than 100 nanometers in diameter, many times smaller than a hair’s breadth.

Their nano-scale gives them different chemical and physical properties from their bulk counterparts, including more surface area for reactions and interactions.

Those interactions could intensify harmful algal blooms in wetlands, according to experiments led by Marie Simonin, a postdoctoral associate with biology professor Emily Bernhardt at Duke University.

Carbon nanotubes and teeny tiny particles of silver, titanium dioxide and other metals are already added to hundreds of commercial products to make everything from faster, lighter electronics, self-cleaning fabrics, and smarter food packaging that can monitor food for spoilage. They are also used on farms for slow- or controlled-release plant fertilizers and pesticides and more targeted delivery, and because they are effective at lower doses than conventional products.

These and other applications have generated tremendous interest and investment in nanomaterials. However the potential risks to human health or the environment aren’t fully understood, Simonin said.

Most of the 260,000 to 309,000 metric tons of nanomaterials produced worldwide each year are eventually disposed in landfills, according to a previous study. But of the remainder, up to 80,400 metric tons per year are released into soils, and up to 29,200 metric tons end up in natural bodies of water.

In a simulated wetland experiment at the Center for the Environmental Implications of Nanotechnology, nutrients together with nanoparticles turned clear water (left) murky (right). Photo by Steven Anderson, Duke University. Source: Duke Univeristy

“And these emerging contaminants don’t end up in water bodies alone,” Simonin said. “They probably co-occur with nutrient runoff. There are likely multiple stressors interacting.”

Algae outbreaks already plague polluted waters worldwide, said Steven Anderson, a research analyst in the Bernhardt Lab at Duke and one of the authors of the research.

Nitrogen and phosphorous pollution makes its way into wetlands and waterways in the form of agricultural runoff and untreated wastewater. The excessive nutrients cause algae to grow out of control, creating a thick mat of green scum or slime on the surface of the water that blocks sunlight from reaching other plants.

These nutrient-fueled “blooms” eventually reduce oxygen levels to the point where fish and other organisms can’t survive, creating dead zones in the water. Some algal blooms also release toxins that can make pets and people who swallow them sick.

To find out how the combined effects of nutrient runoff and nanoparticle contamination would affect this process, called eutrophication, the researchers set up 18 separate 250-liter tanks with sandy sloped bottoms to mimic small wetlands.

Each open-air tank was filled with water, soil and a variety of wetland plants and animals such as waterweed and mosquitofish.

Along the way the researchers monitored water chemistry, plant and algae growth and metabolism, and nanoparticle accumulation in plant tissues.

“The results were surprising,” Simonin said. The nanoparticles had tiny effects individually, but when added together with nutrients, even low concentrations of gold and copper nanoparticles used in fungicides and other products turned the once-clear water a murky pea soup color, its surface covered with bright green smelly mats of floating algae.

Over the course of the experiment, big algal blooms were more than three times more frequent and more persistent in tanks where nanoparticles and nutrients were added together than where nutrients were added alone. The algae overgrowths also reduced dissolved oxygen in the water.

It’s not clear yet how nanoparticle exposure shifts the delicate balance between plants and algae as they compete for nutrients and other resources. But the results suggest that nanoparticles and other “metal-based synthetic chemicals may be playing an under-appreciated role in the global trends of increasing eutrophication,” the researchers said.

This research was conducted through the collaborative multi-institutional Center for the Environmental Implications of Nanotechnology (http://ceint.duke.edu/) supported by the U.S. National Science Foundation and the Environmental Protection Agency under NSF Cooperative Agreement EF-0830093 and DBI-1266252, and by grants from National Institute of Environmental Health Sciences (T32-ES021432) and the Duke Wetland Center Endowment.