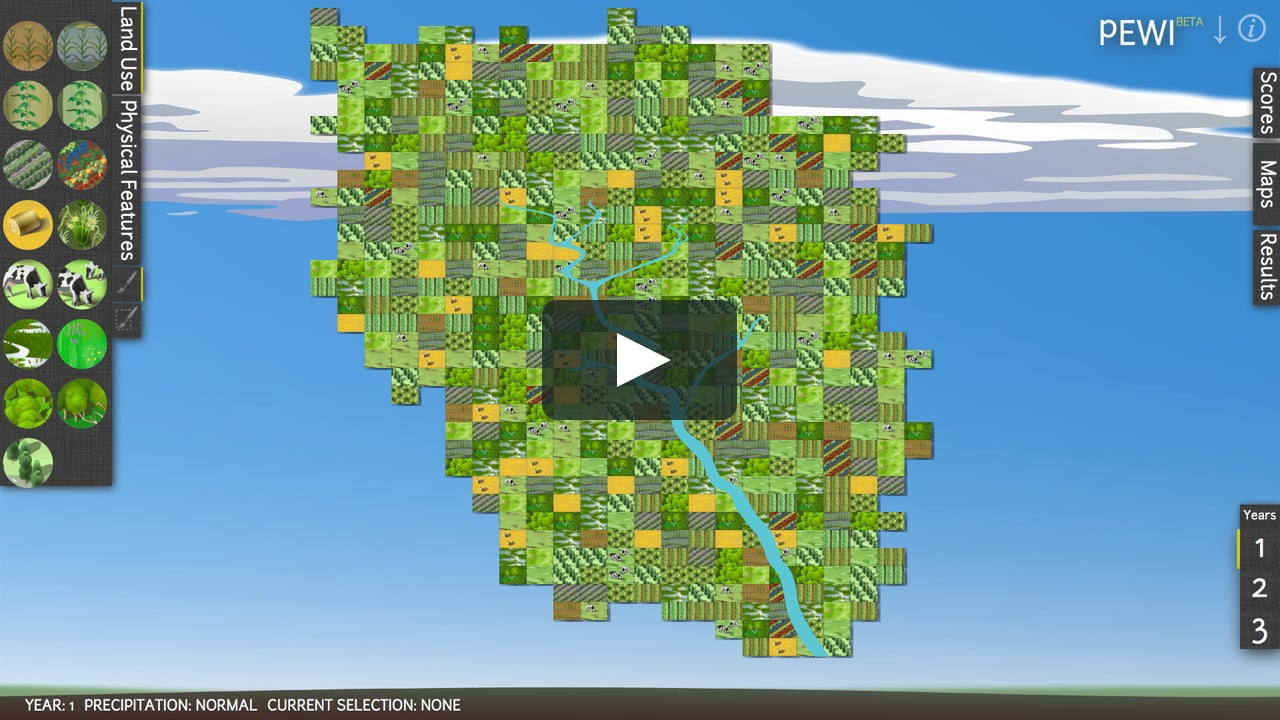 Iowa State University personnel have designed an online simulation that allows students and adults to experiment with how land-use practices can affect the health of a watershed.

People in Ecosystems Water Integration, or PEWI (pronounced pee-wee), is a web-based educational game designed to help users understand the production and environmental consequences of various agricultural and conservation practices, according to an Iowa State Extension news release.

The simulation presents users with a 6,000-acre virtual watershed divided into a grid of 10-acre sections. Users can then choose how each section of land is used, selecting from a menu of options that includes conventional corn and soybean production, livestock production, wetlands, prairie, forest and more.

The program aims to present complex scientific concepts in a user-friendly way, said Lisa Schulte Moore, a professor of natural resource ecology and management who leads the PEWI effort.

“This isn’t the first computer simulation to try to model these concepts, but previous attempts require you to be an expert to understand them,” Schulte Moore said. “This one was designed to be understandable and usable for those who aren’t experts — middle school students, for instance.”

Schulte Moore said PEWI has been used mostly in college courses so far, but she envisions adapting the tool for middle and high schools.

John Tyndall, an associate professor of natural resource ecology and management, said he uses PEWI in land management and economics courses he teaches.

The simulation helps to illustrate concepts related to land use, ecosystem processes and service outcomes, Tyndall said, and the feedback he gets from students is overwhelmingly positive.

“At this point, I can’t imagine teaching these concepts, and more, without PEWI,” he said.

Schulte Moore said college instructors have developed an exercise that asks students to design a watershed similar to what might be seen in the countryside today, then implement a variety of practices to achieve the Iowa Nutrient Reduction Strategy goals of 45 percent reduction in total nitrogen and phosphorus loads to water.

The program’s virtual watershed is based on Midwestern conditions, but it’s not meant to match the real world on an acre-by-are basis. Instead, Schulte Moore said allowing users to experiment with a “fictitious space” encourages users to explore alternatives more freely.

“Playing around with this theoretical, virtual world frees people to be more adventurous and really test the concepts we’re looking at,” she said.

The program began as a computer spreadsheet that Schulte Moore built to account for a range of variables regarding land use and environmental effects. Schulte Moore and a team of programmers and researchers conducted a thorough scientific review of available data to make the simulation as accurate as possible.

A beta version of the simulation launched in spring 2014, and the full version went live this summer. It can be accessed for free at: http://www.nrem.iastate.edu/pewi/

Schulte Moore said the team is already improving the simulation, and a third update of PEWI should be ready in January 2017. The new version will include an option to customize the landscape and allow more than one user to work on the same simulation.

“We’ve made an effort to make PEWI a tool that’s easy to use and understand without sacrificing the science,” Schulte Moore said.