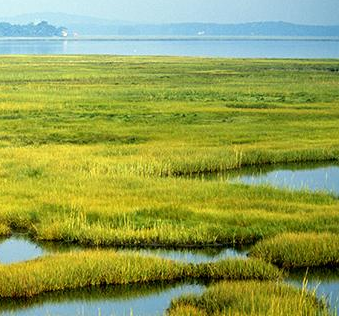 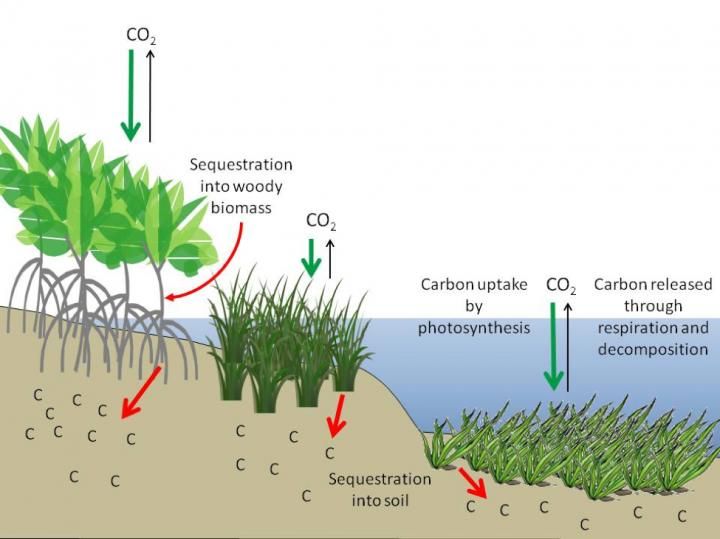 The efficiency of (L-R) mangrove forests, salt marshes and seagrass beds as reservoirs for carbon; Howard et al., 2017, Frontiers in Ecology and the Environment

In the global effort to mitigate carbon dioxide levels in the atmosphere, all options are on the table--including help from nature. Recent research suggests that healthy, intact coastal wetland ecosystems such as mangrove forests, tidal marshes and seagrass meadows are particularly good at drawing carbon dioxide from the atmosphere and storing it for hundreds to thousands of years.

Policymakers are interested to know whether other marine systems--such as coral reefs, kelp forests, phytoplankton and fish--can mitigate climate effects. A new analysis co-authored by a University of Maryland scientist suggests that, while coastal wetlands serve as effective "blue carbon" storage reservoirs for carbon dioxide, other marine ecosystems do not store carbon for long periods of time.

The research paper, published February 1, 2017 in the journal Frontiers in Ecology and the Environment, also notes that coastal wetlands can help protect coastal communities from storm surges and erosion. Coastal wetland areas are easier for governments to manage compared with ecosystems that reside in international waters, further adding to the strategic value of coastal wetlands in the fight against climate change.

The research paper integrates previous data on a variety of coastal and marine ecosystems to determine which systems are best suited to mitigate climate effects. To make this assessment, Sutton-Grier and her colleagues evaluated how effectively each ecosystem captures carbon dioxide--for example, by plants using it to build their branches and leaves--and how long the carbon is stored, either in plant tissues or in soils.

Coastal wetlands outperformed other marine systems in just about every measure. For example, the researchers estimated that mangrove forests alone capture and store as much as 34 metric tons of carbon annually, which is roughly equivalent to the carbon emitted by 24 million passenger cars in a year. Estimates for tidal marshes and seagrass meadows vary, because these ecosystems are not as well mapped globally, but the total for each could exceed 80 metric tons per year.

All told, coastal wetlands may capture and store more than 200 metric tons of carbon per year globally. Importantly, these ecosystems store 50-90 percent of this carbon in soils, where it can stay for thousands of years if left undisturbed.

The researchers' goal is to help inform resource managers and policymakers where to focus their limited resources to have the greatest impact on climate mitigation. The new analysis acknowledges that other ecosystems, such as coral reefs and kelp forests, provide valuable storm and erosion protection, key fish habitat and recreation opportunities, and thus deserve protection. But their capacity to store carbon over the long term is limited.

Researchers have often looked to terrestrial forests as carbon sinks as well. But most forests do not store substantial amounts of carbon in their soils. As such, the researchers believe that coastal "blue carbon" habitats may stand alone as the most efficient biological reservoirs of stored carbon on Earth.