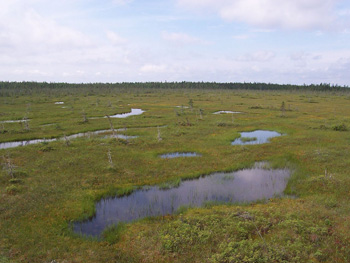 When a peatland experiences two disturbances in a short period of time—such as drainage and fire—that “double whammy” upsets the natural paths to stable recovery, said Mike Flannigan, an ALES researcher in the Department of Renewable Resources.

He said peatland may convert to shrubs and grasses, making it more vulnerable to fire. When fire occurs, he added, any legacy carbon that’s been stored as peat for thousands of years is vulnerable for release to the atmosphere, through the combustion process. In addition, with shrubs and grasses now inhibiting the growth of new peat, the area’s carbon sink is removed.

Researchers discovered how climate change might contribute to this cycle by studying a unique chunk of northern Alberta’s wetlands, south of Slave Lake.

In 1983, a 50-hectare portion of this peat wetland was drained to encourage forestry. A modest amount of water was removed—approximately what is predicted to be lost due to climate change-induced evaporation. Then in 2001, a wildfire burned both the drained and undrained portions.

When Flannigan and researchers from the University of Birmingham studied the wetland in 2010, they found that the undrained section was stable: its water table level was high, moss had regrown and it was storing carbon.

The drained section was much different. It had 77 per cent less moss. Instead, it had willow and birch trees whose leaf canopies inhibited moss growth, and shrubs. Essentially, the drained area had changed from moss-dominated peatland to a shrub-grass ecosystem that didn’t accumulate carbon.

A shrub ecosystem is less resistant to fire than a peatland. In fact, the new ecosystem is more likely to experience a higher frequency of wildfires.

Loss of its ability to store carbon is also significant because carbon is released with fire. If not stored it “will remain in the atmosphere as greenhouse gasses that will favour enhanced warming of the atmosphere,” said Flannigan.

Due to climate change, it’s already expected that the annual area burned in boreal North America will double by 2100, further increasing the release of carbon.

The study was published in  Scientific Reports  in January.